Posted at 13:34h in Press by Janet Atkinson 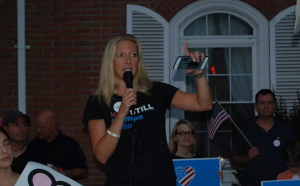 GLEN ROCK, N.J. – About 200 people gathered in Glen Rock for a candlelight vigil last night to show solidarity with victims of violence in Charlottesville, Va.

Participants came bearing signs stating phrases such as, “Diversity is what makes American great,” and “Equality for all.”

The vigil, hosted by Women for Progress and Glen Rock After the March, was also attended by Freeholder Tracy Zur and Congressman Josh Gottheimer.

“We must stand up to hate, intolerance and bigotry. That’s why I joined the Charlottesville vigil tonight in Glen Rock,” Gottheimer shared on Facebook.